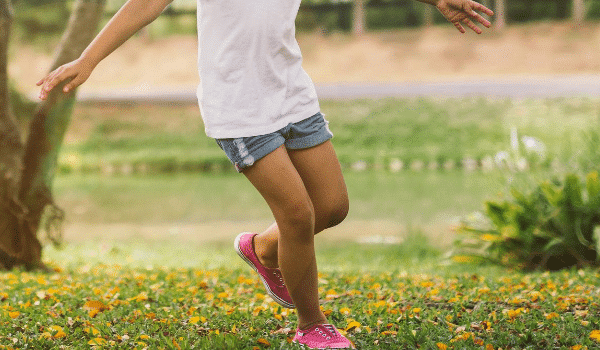 I have been surprised at the results in my own home and in other families that I work with. This is all about movement and learning for the older child.

“I can think of better ideas, Momma, if you just let me walk around.”

My eleven-year-old son was narrating a story, as part of our writing lesson for the day.

I was typing his words as he spoke them and had asked him to stay close to me so I could hear him spin his tale.

As soon as he sat down, he began to struggle.

He fumbled with word recall.

He struggled to figure out what his hero should do next.

He began to get discouraged.

Quickly, I encouraged him to get back up and move as much as he needed to.

I handed him the silly putty.

As he made figure eights around the table, he grew more and more engaged. The final result was an amazingly coherent story, complete with plot twists and humorous anecdotes. 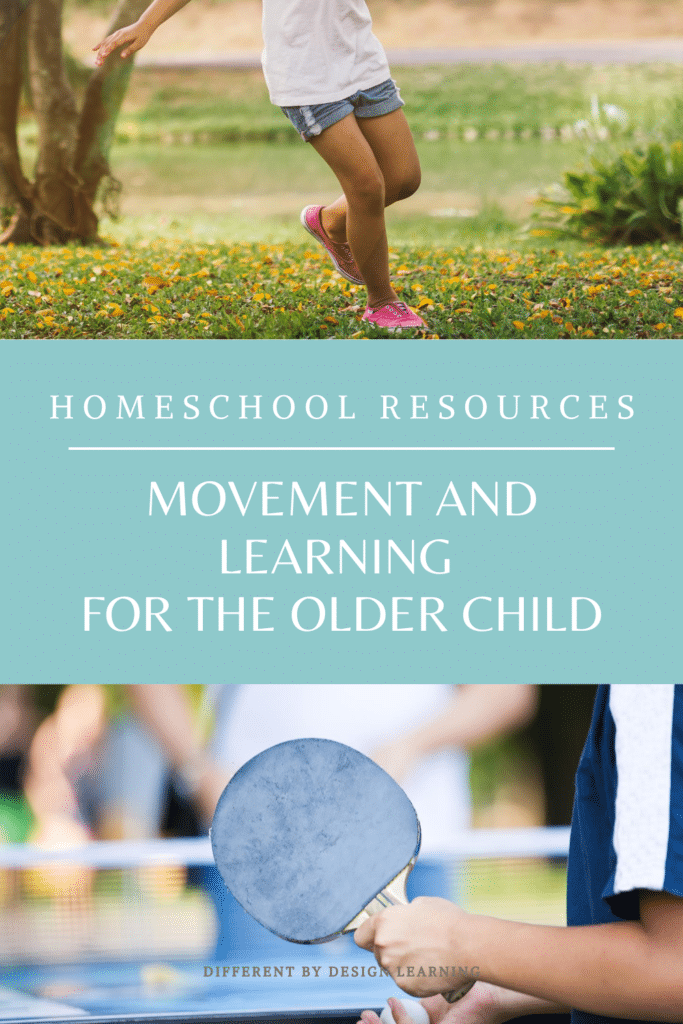 The importance of movement in learning is not a new concept for me.

(I am the mom who allowed my son to do math on the trampoline for an entire year.)

I am finding, however, that as my sons grow older, they are less likely to engage in the same types of movement as when they were little.

Gone are the days of sidewalk chalk and hopscotch for practicing letters. Hanging upside down on the couch while I read aloud is apparently “very childish.” Going to the park near our house to play while I call out different vocabulary words hasn’t been a thing for more than a year now.

My children are growing up.

But, the truth is, although he may feel conflicted about our old approach to movement and learning, my youngest son really does still need it in order to focus and excel. 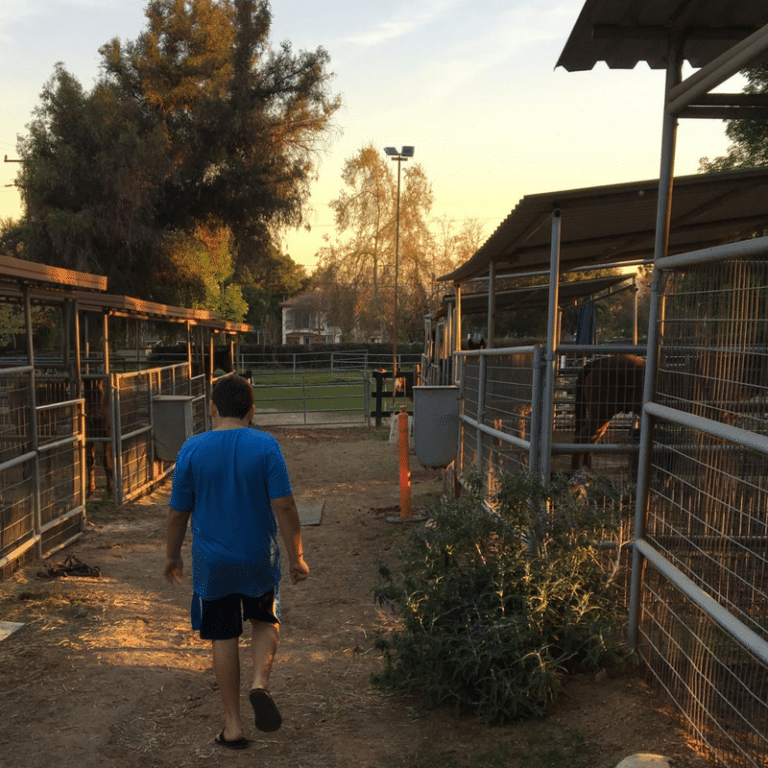 Lately, I have tried to come up with new, more “mature” ways to help my son connect with his learning through movement.

Although it is still a work in progress,  I am finding these new options allow him to focus and learn, while still increasing his ability to sit for longer and longer periods of time.

Here is what has helped.

Movement And Learning For The Older Child

It may seem simple, but it works. Encouraging my son to walk around during our lessons is a much-needed, super simple and very effective way to get him moving.

I used to do the exact same thing in conference room brainstorming sessions when I worked outside the home.

Sometimes, just walking back and forth gets the ideas flowing.

It works well for narration, as I shared above.

I also find that if we are completing a quiz or checking for comprehension, encouraging my son to pace increases his recall and engagement. 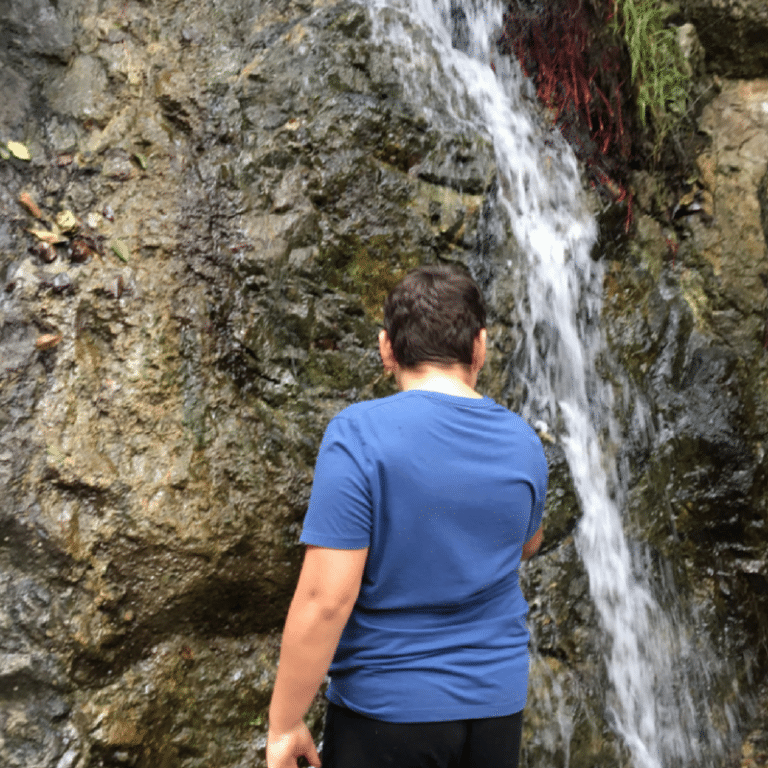 I am not sure why I resisted including this in our weekly routine for so long. I think I was intimidated by the idea of being “that mom.” You know the one with perfect nature journals and birds landing on her shoulders as she sings like Snow White for her children’s enjoyment?

I am so not that mom.

I am the mom who fell in the mud in second grade, got stuck out in a canoe on the lake in high school and had to be rescued, and swore that I would never, ever camp again.

Then I had kids.

I have found that nature walks are not as big a deal as I worried they might be.

The truth is, we drive to a local hiking trail, and walk.

I don’t really prep much. We just walk and chat. Eventually, my boys start to ask questions and engage with one another.

Last week, we talked about France’s role in WWI as we walked.

I am 100% sure if I had asked either of my children to sit down with me and talk about WWI, there would’ve been a mutiny.

But getting them out into the fresh air and moving, made for an excellent history lesson. 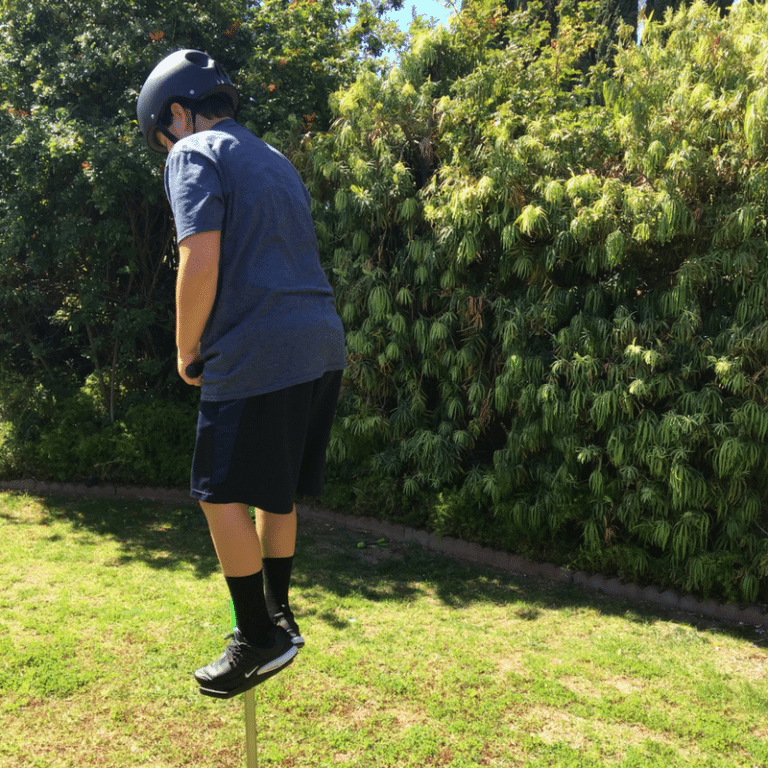 My son used to love bouncing from one sight word to the next on the trampoline.

Now, I post them on a wall and he throws a football at them as he reads.

He used to enjoy running his fingers along sandpaper letters placed strategically on the grass in our backyard.

Now, I write sight words on ping-pong balls and he tries to throw them into buckets.

Although the games are changing, the effect is still the same.

If my son moves and is able to hold something in his hands while he practices certain tasks, he retains more of the learning. 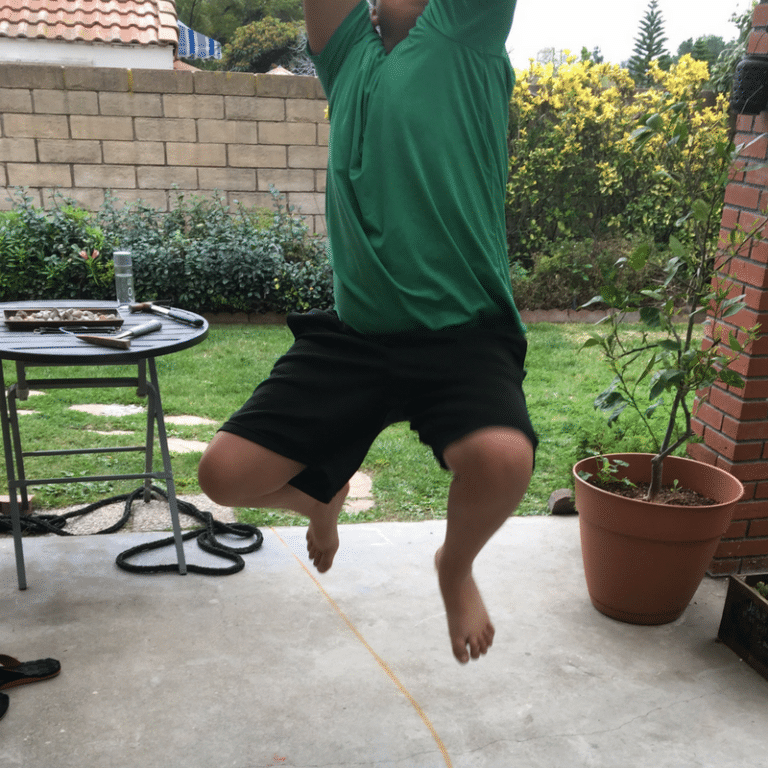 Continuing to incorporate movement into my older child’s learning is something that requires more intentionality on my part, to be sure.

and it’s so much more fun.

For daily glimpses into our learning activities, please join me on Instagram. I post pictures every day of all the crazy things we do each day in our attempts to learn. 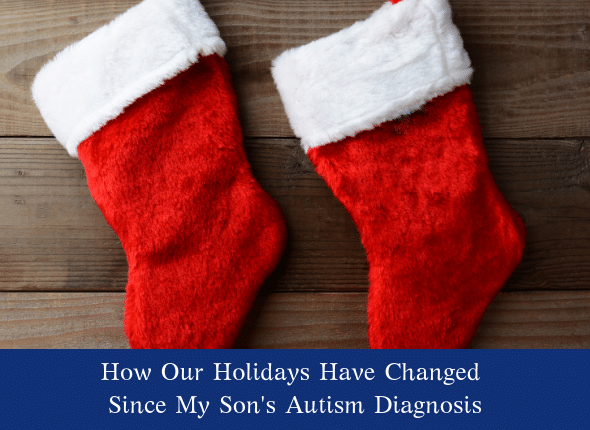 “I want a roll,” my son said through clenched teeth, anxiously staring at all the food laid out on the table. “Let’s try some turkey too…just a little,” I coaxed, feeling embarrassed that my sister had slaved all day long, making a huge Thanksgiving meal for us, and my son was about to meltdown over… 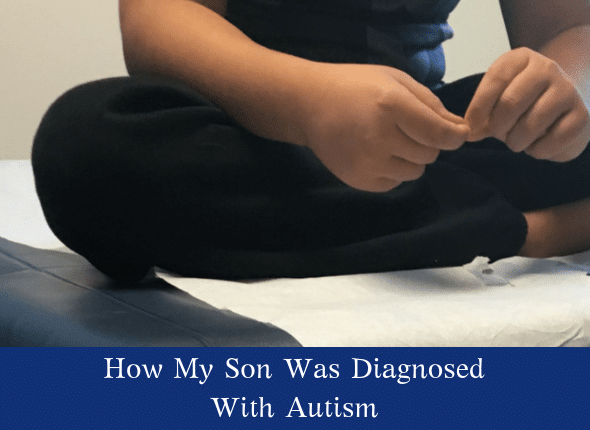 I was recently asked to describe the events leading up to my son’s autism spectrum diagnosis. It was not as easy as I thought it might be. Where does a momma begin? The early years of crying, of sensory overload and exhaustion? The preschool years, when it became clear that something was different? Not less,… 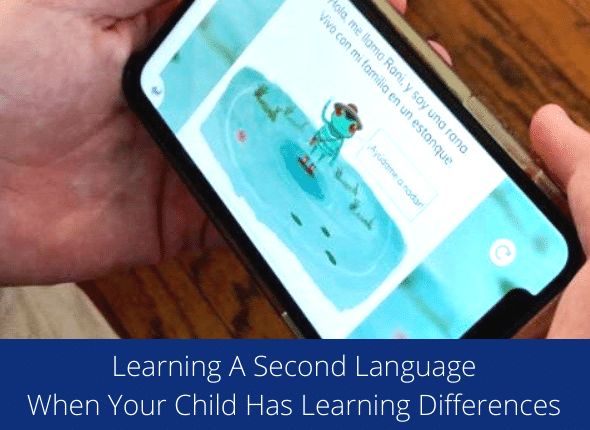 Learning a second language when your child has learning differences is possible, but it requires a unique approach! When my youngest son was in first grade, he participated in a one day a week co-op.  He loved playing with the other kids. He loved the PE class. He looked forward to going every week …… 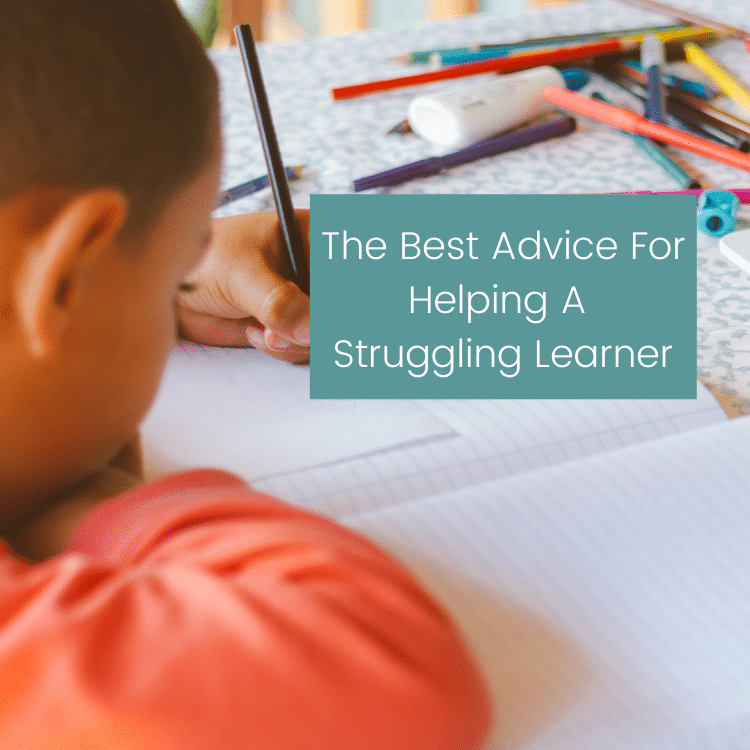 After almost a decade of teaching my children with learning differences, this is, by far, my best advice for helping a struggling learner. “I am not sure he is ever going to learn to read.” I said this to my husband, over coffee and through tears one morning about a year ago. My then twelve… 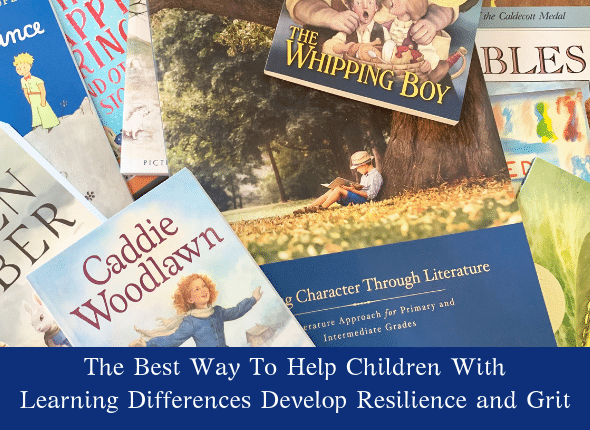 My youngest son has spent most of his academic life struggling. Struggling to read. Struggling to understand and process. Struggling to not give up. As he gets older, this struggle is taking it’s toll. I understand. It’s been years without significant progress and some days, it’s discouraging even to me. I can only imagine the…

It has been so humbling to hear from so many of you the past few weeks. Comments on the blog and Facebook page, private messages filled with tears and hope, email after email – please know, I am blessed by every single one. There is something about hearing the soothing words of another who “gets…