My child refused to go to school every single day. A decade later, here is what I’ve learned and what I wish someone would’ve told me then.

It’s been ten years since the day that finally broke me.

It was the day after the Veteran’s Day holiday weekend. My then second grade son, struggled from the moment he woke up, to get out the door and get to school.

The first major meltdown came when it was time to get his shoes on.

He already wore tennis shoes several sizes too big for him because he feet were so uncomfortable in appropriate fitting footwear, but the socks were unavoidable. His school required shoes and socks as part of the dress code.

I bullied him into getting the socks and shoes on his sweet little feet, not knowing it was sensory distress causing his reaction and not disobedience.

We got in the car and I began to try to prepare him for the school drop off line. It didn’t work. He went into full on fight or flight as we pulled up for our turn.

In a moment that I will tear up thinking about for likely the rest of my life, I physically removed him from the car as he cried, and drove away.

As I worried about being late for work and felt the frustration of “why does this happen every single morning,” I caught sight of him in the rear view mirror.

My sweet little boy, in yellow shoes way too big for his tiny body, totally defeated in the pouring rain.

My heart broke in that one moment. It’s been broken for him ever since. 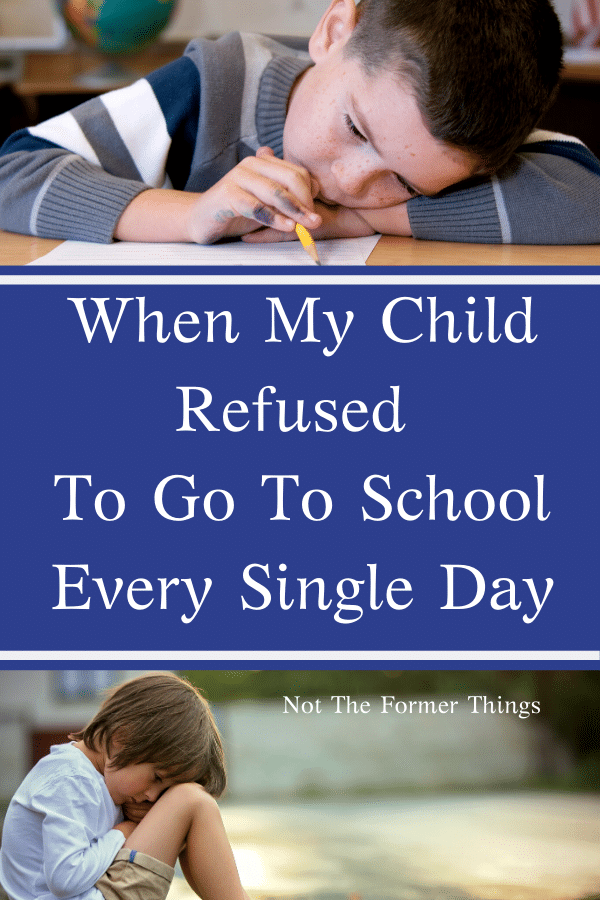 It wasn’t until a year later that I began homeschooling him, but that moment changed everything. There was something about seeing my sweet boy in so much pain, in the reflection of that rear view mirror, that shifted my perspective. I started seeing him and his resistance differently. I began trying to figure out what was really going on, as much for him as for me.

I stopped believing that the way everyone else did life was right for my son and most importantly, I started looking for ways that did work for him. 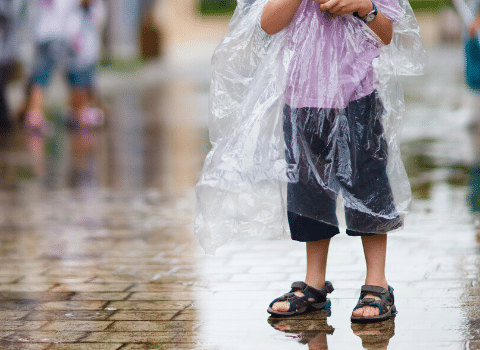 When My Child Refused To Go To School Every Single Day

A decade later, I can see that my fear of what life would be like if we made a radical change like homeschooling, was keeping us from what we both really needed to function well, for meas a mom, and for him as a growing child with autism.

A decade later, here is what I’ve learned and what I wish someone would’ve told me then.

They are real and in my son’s case, they drove a large percentage of his reactions and behaviors. Hearing every single child’s pencil scratching on the papers, the smell of bleach used to clean the lunchroom the night before, the feeling of the grass on his hands during PE and yes, the socks and shoes – all of it added up to a child in constant distress.

Sensory issues are a significant source of stress and overwhelm for many children. The more I understood this and how it impacted my son, the easier our lives became.

Is Sensory Processing Disorder Really That Big Of A Deal?

2. School refusal is a big deal.

It is not normal for a child to repeatedly experience significant anxiety, every single day, around attending school. While I knew this, on some level, the truth is I felt a significant amount of shame because of my son’s constant refusal. Moreover, I also felt blamed by his teachers, the front office and his doctor whenever it came up.

What I’ve learned is that my instincts, though I tried to ignore them, mattered far more than the “standard expectation” for an eight year old boy. I remember thinking to myself that he was acting like a scared animal every morning. I had no idea at the time how appropriate that description would prove to be.

When Your Child Is Too Anxious For School

3. I was already homeschooling in many ways.

Once we actually began homeschooling, I was surprised at how familiar it felt. Because my child was struggling so much in the school environment, we were doing a significant amount of work at home each night. Worse still, we were doing it when he was exhausted and totally strung out after a long day of trying to keep it together.

Our first week of homeschooling, I was painfully aware that the amount of time and energy we invested in school at home was strikingly similar to what we had been doing all along. Some people are surprised to hear that I found homeschooling to be easier than homework, but it is absolutely true.

4. Embracing different is everything.

Looking back, I can see that I was so worried about my son being “different” from the other kids, I lost sight of my sweet son. The reality is that he did have differences that required attention and care. Rather than trying to force him to fit into an environment and set of expectations that did not accommodate him, embracing his differences and determining how best to respond to them has helped my son in ways that the classroom never could.

When Your Child Is Different

I dropped my son off for his partial day at a local private school this morning. Now a junior in high school, he easily hopped out of the car, grabbed his backpack and waved at me, excited to get inside to his friends and his studies.

As he walked away, I noticed his crocs, shoes that work well for his sensory sensitivities. They are exactly his size. We are no longer forcing his feet into shoes that don’t fit.

A decade later, he now walks confidently, into learning and into life. 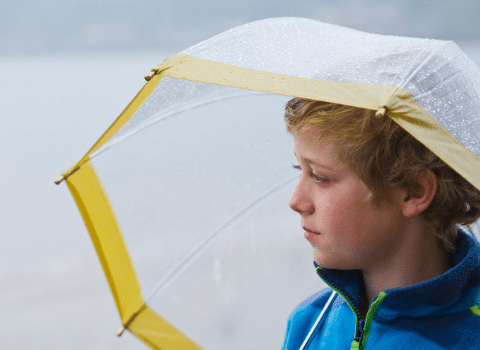 For More Encouragement And Support

The Constant Turmoil Of Parenting A Child With Special Needs

Is There Anything I Can Do To Really Help My Anxious Child? 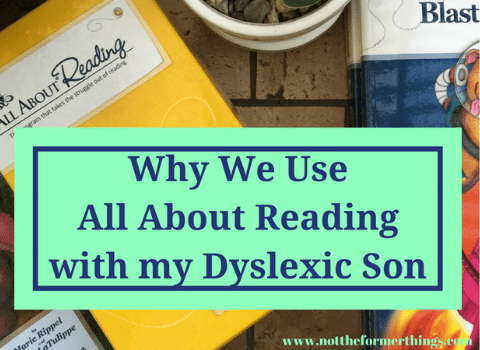 We began homeschooling my youngest son when he was in kindergarten. He loved animals, getting messy and telling terrible jokes. (Five years later, he still does!) Having him home was fun, for both of us, almost all the time. The only exception was when it was time to practice phonics. We tried every single program… 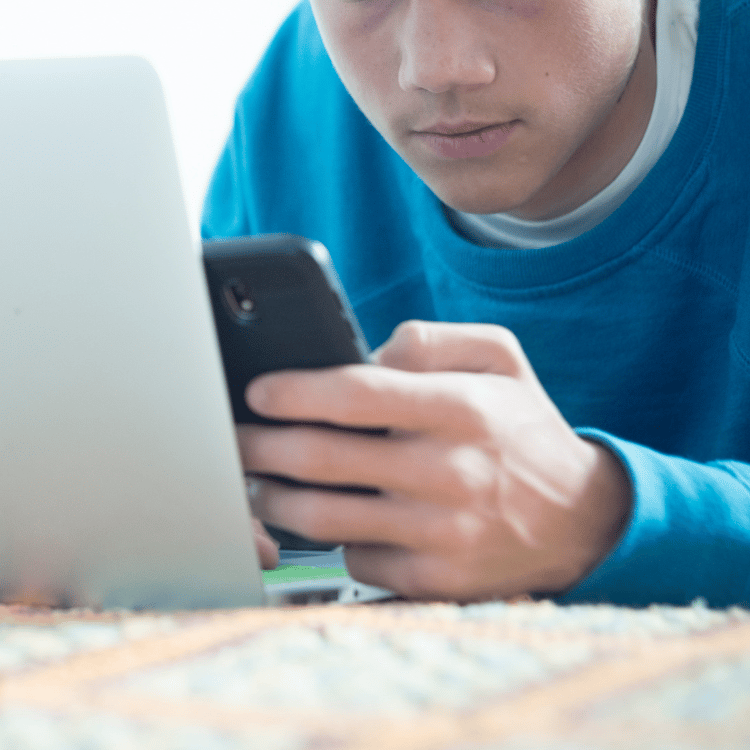 It can be difficult to find ways to practice spelling with an older learner because most programs are designed for young children. In this week’s lesson plan recap, I include an in-depth discussion of how we approach spelling with my teenage son’s learning differences. Last week, I shared a quick snapshot of some of the… 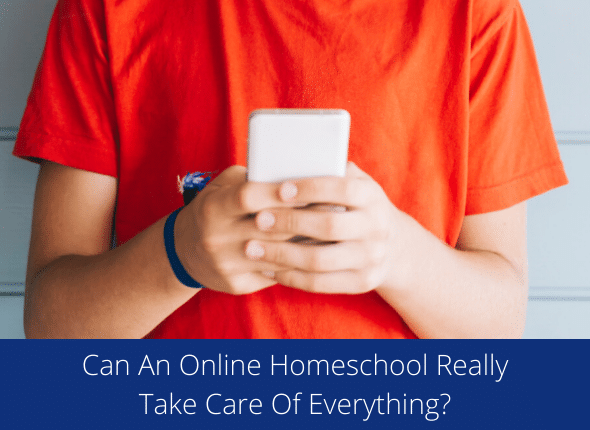 A few weeks ago, I was asked a question by a new to homeschooling family . The more I thought about it, the more I realized I have the same question. Can An Online Homeschool Really Take Care Of Everything? As my son gets closer and closer to the end of his high school years… 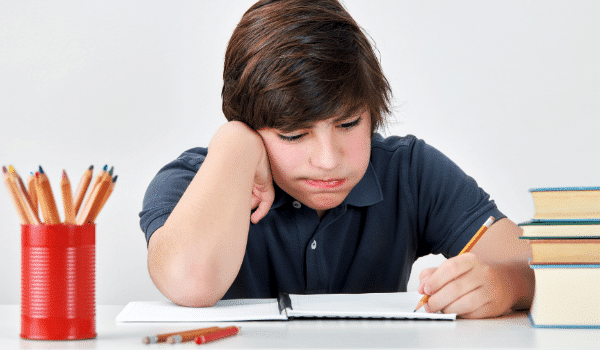 This is an honest look at ADHD and the Middle School years.  My son was diagnosed with ADHD at age 10 – very late by ADHD standards. Although I had long suspected it, I also did not feel like there was any pressing need to pursue testing and diagnosis. If I am honest, part of… 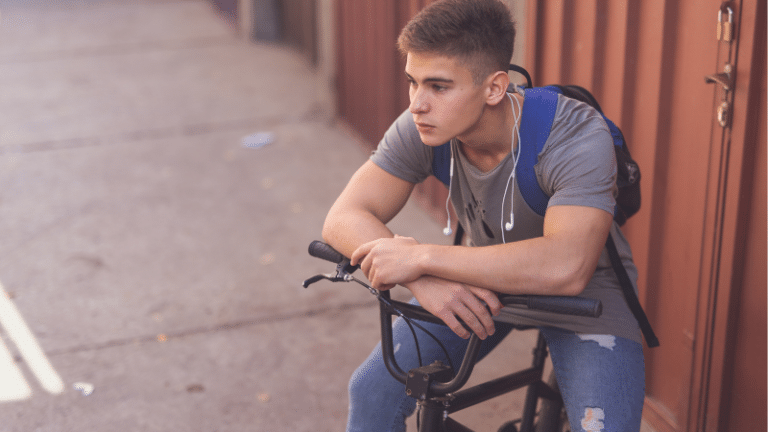 When I was in the sixth grade, I ran for student council president. One of the requirements was getting up on stage, in front of the entire school, and giving a speech about why you should be elected. I bombed. For reals. I couldn’t remember the lines I had prepared. I stuttered and started sweating…. 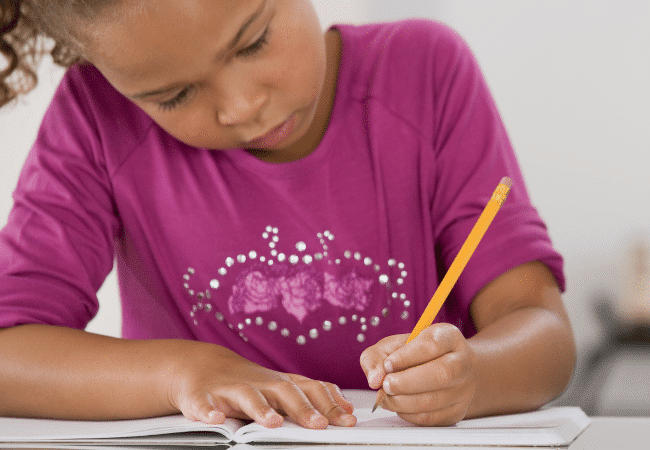 “Why is writing such a difficult subject in our homeschool?” I have been asked this over and over again, especially this year. Writing is not working for a lot of kids right now. Here’s how you can help. Broken pencils. Big tears. Avoidance. Outright defiance. Total breakdowns. These are just some of the words parents…