The following excerpt is from one of my favorite autism bloggers. Musings of An Aspie has given me so much insight into my son’s mind and experience. This post is no exception.

When our daughter Jess was little, her dad and I used to take her to see a lot of animated movies. Jess and I really enjoyed them, but The Scientist often dozed off twenty minutes into the film. He slept through Toy Story and Shrek and Monsters Inc. before we all decided that a better plan was to split up when we went to the movies. That way he was free to see the latest action movie while Jess and I watched the newest offering from Pixar or Disney.

The Incredibles, Cars, innumerable sequels in the Monsters, Toy Story and Shrek series. Nightmare Before Christmas. Brave. WALL-E. Coraline. Up. Paranorman . . . Actually, I saw quite a few of those by myself. Jess is all grown up now and The Scientist still isn’t a big fan of kid’s movies. To be fair he stayed awake for the entire Lego Movie and thoroughly enjoyed Big Hero 6, but he wouldn’t have gone to see either if I hadn’t suggested it.

I imagine quite a few adults would consider my interest in animated movies that are mostly marketed to children to be childish. It certainly hasn’t escaped my notice that most of the other adults in the theater are there to chaperone children.

I’m not sure what it is about animated movies that I enjoy so much. Maybe it’s a sense of nostalgia, dating back to the time when I was a young parent and the excitement that we shared as a family going to a new movie. Maybe it’s the sly humor that the writers build in for the adults in the audience alongside the simple feel-good themes that most of the movies have. I’ve even seen it suggested that many of us gravitate toward animation because the exaggerated facial expressions are easy to decipher.

Whatever the underlying reason, it’s hard to escape the sense that my enjoyment of the movies is somewhat age inappropriate. I don’t know a lot of other middle-aged women who were as excited as I was about the Lego movie. I do know better than to blurt out “How about that Lego movie?” when talking with most other women my age.

The concept of “age appropriate” has been one that’s always haunted me. In elementary school, from about fourth grade, I began to get the sense that most of my peers seemed to somehow older than me. As if they knew something I didn’t.

By the time I got to middle school, that vague sense of being “behind” widened into a very obvious maturity gap. Many of the other girls in my class were developing an interest in dating and fashion and other things that marked a critical right of passage, and in which I had little intrinsic interest. In high school, most of my peers spent the school week looking forward to a weekend of drinking, partying, dating, football games and dances. Again I felt left out, having barely caught up with the concept of dating.

My interests ran more toward listening to music, reading, riding my bike, and shooting baskets in the driveway. At least the ones that I would publicly admit to. I also had a huge fascination with the TV show M*A*S*H and still liked to pull out my collections of baseball cards, stamps, and coins. Occasionally I pulled out my model train set or my Matchbox cars and Barbies were still in my closet. My bed was home to as many stuffed animals as it could hold and I still had a well-worn baseball mitt that I’d gotten in fourth grade.

Instinctively, I knew that there were things that it was “okay” for a teenaged girl to be interested in and interests that were best kept to myself. Sometimes the appropriateness of an interest hinged on gender stereotypes, but just as often it was related to age, either in the sense of something being “too childish” (or sometimes “too adult”) for the age that I currently was.

I’m sure this is a typical reaction of many young people as they make the transition into adulthood in their early twenties, however I was still thinking this in my late thirties and early forties. After being diagnosed with Aspergers, I finally realized that there would be no magical catching up with my peers. I was simply different and that was okay.

The really interesting aspect of this to me, is that while autism is commonly referred to as a developmental delay, no one ever explicitly told me that I was “delayed.” Many years spent comparing myself to my typical peers and seeing the obvious differences had somehow caused me to assume that I was just a few steps behind them.

It’s not surprising to me that many parents look at their autistic children and make the same assumption, often with the encouragement of doctors, teachers, and other professionals in their children’s lives. And in the same way that I passed many years simply assuming that I would catch up, I think many parents spend years operating under the assumption that the goal of their children’s education should be to “catch them up” to their typical peers rather than to equip them in ways that are practical and useful for the child.

Finally, it’s important for parents and others who work with autistic kids to understand the difference between, for example, understanding the social world and having neurotypical social skills. The former is achievable to some degree for many of us on the spectrum; the latter not so much.

For example, my social skills are not and never will be those of a typical adult. I don’t have the social skills of a 14-year-old or a 20-year-old or a 30-year-old. It’s not as if I’m simply behind some imaginary developmental curve. My ability to read facial expressions and body language has been “stuck” at the basic level for decades. And I’m fine with that. I have coping mechanisms to make up for some of what I lack and the rest I’ve learned to live with. In the past, I’ve tried to learn how to read more subtle nonverbal communication and finally concluded that it’s not going to happen. 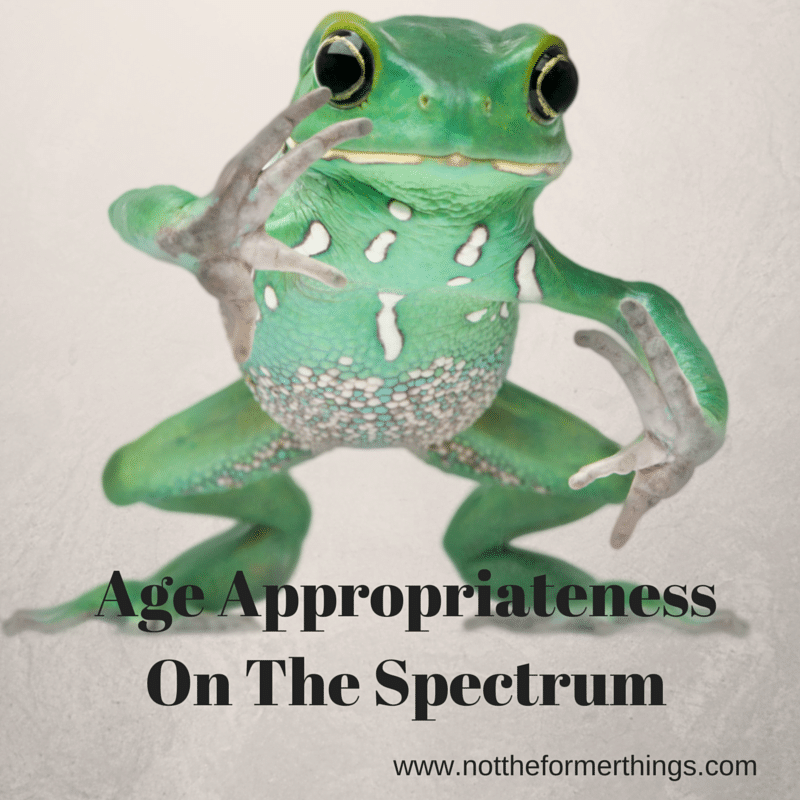 In fact, as I was talking about some preliminary ideas for this post with The Scientist, I told him that teaching me to make consistently natural-looking eye contact would be like teaching a frog to fly. No matter how many times you take the frog up on the roof and toss it off, it’s never going to sprout wings. And it doesn’t need to.

For more insight, information and honesty, please visit Musings of An Aspie. Cynthia gives us a glimpse into our children’s lives in a way I have not found anywhere else. I am grateful for her honesty and heart to help us understand.

It’s been a couple days of crazy up in here. Chronic pain and a rigidly thinking mind make terrible partners. My son has struggled to eat, to move, and to think clearly for 48 hours. I have been in tears more the last two days, than in the two total months prior. In the haze…

I wrote an entire post last week whining about how hard it is to be consistent with our routines. Turns out, I am not alone in this quest to figure out how to maintain the flow of our days. Many of you asked for more information about what our routines are, no matter how bad…

My son melted down every single day, sometimes more than once a day, for several years. It was so very sad. And brutal. And destructive. And exhausting. And so very sad. We don’t see them as much now. (Thank you, Lord.) But when they happen, the effect is just as devastating.  He has been in… 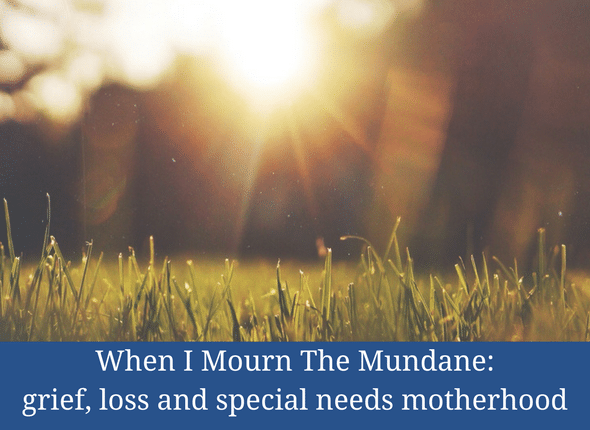 I saw them as I drove out of the Target parking lot. Two little boys, rolling down a grassy hill, squealing in delight as their momma waited at the bus stop nearby. Such a simple little scene… But I felt like I couldn’t breathe, watching the oldest boy roll with abandon and wild joy. Tears… 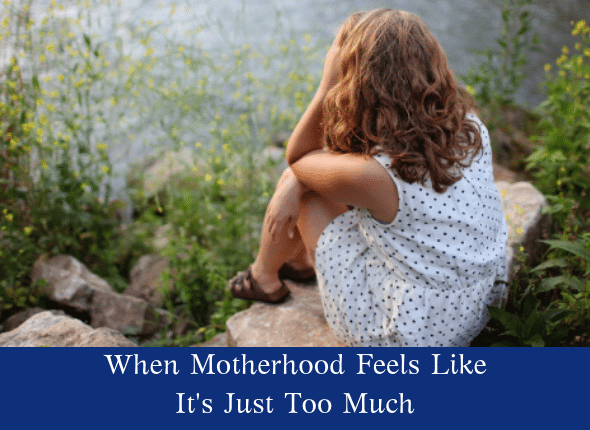 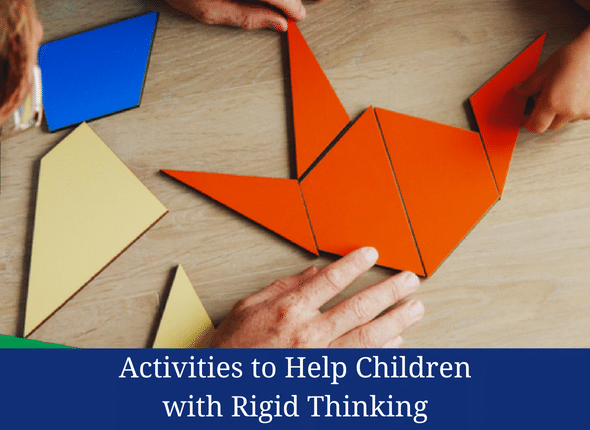